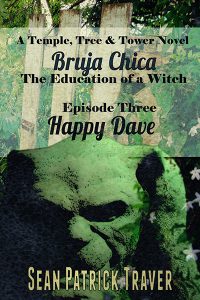 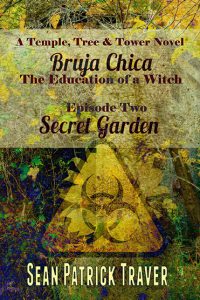 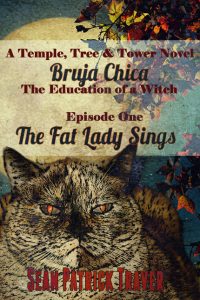 “I loved everything about THE FAT LADY SINGS – the dark magic, the descriptions of hidden L.A., the coming-of-age tale – but I think my favorite part is the poignant and wonderfully-written story of the bond that develops between human and animal companion. I can’t wait for the rest of this series!”

A ghost, a garden, and a girl…

BRUJACHICA is an episodic series of eight novellas, published by Omnium Gatherum. The first and second volumes, THE FAT LADY SINGS and SECRET GARDEN, are available now, with subsequent installments to follow.

Tomas Delgado, the ghost of a century-old necromancer who currently resides in the body of a black cat, takes a young orphan-turned-witch under his tutelage. This episodic tale takes us from Tom’s earliest efforts to provide shelter and food for a young girl in an unforgiving urban landscape to her eventual maturation into a powerful sorcerer who must decide how to use her extraordinary skills in the everyday world.

Episode One: The Fat Lady Sings

Predators lurk in the city and one has set his sights on Tom’s young ward. In his current form as a tiny, sickly kitten, he’s no match for this human monster. Not far away, though, there just might be a lady who is…

Where in the middle of a city can a witch-in-training learn the ancient ways of sun and soil, wind and rain? LA has changed a lot in a hundred years, but the ghost of old Tomas Delgado knows of one still-wild patch in the heart of the suburbs where his student might practice her crafts in the traditional manner: with one foot planted in the natural world, and the other in human society. But the space must first be made ready, before the work begins, and the faded ghosts of memory must be cleared away…

Ghost and girl have found a place to stay, a secret haven in a forgotten garden where she can practice her newfound skills. A bomb shelter built decades ago makes for a cozy underground home; untended fruit and nut trees provide a bit of nourishment; and the natural elements are ready to share their primal secrets. But the realworld remains right outside the fence, and old Tom knows they’ll have to make some accommodation with it. How can his girl keep one foot in the realm of ordinary events and the other in the numinous world of witchcraft?