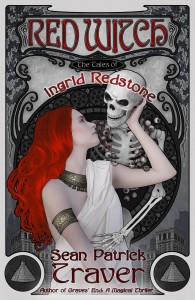 “In RED WITCH, travel to a world where there are portals in the sky, where heartbreak and love inspire magic, where the normal world is just a stage to another, older world of Gods and other monstrosities for those who earn the keys. As immersive as it is genuine, RED WITCH takes its proper place among stories of Dark Fantasy with its compelling and unhinged imagination.”

1910.  Actress, occultist, and bohemian adventurer Ingrid Redstone travels to the fledgling city of Los Angeles in search of a legendary Hole in the Sky, said to be a portal to the Aztec afterlife. On the far side of it Ingrid meets Mictlantecuhtli, an ancient and bloodthirsty deity who soon becomes dangerously fascinated with the first living woman he’s ever met. Ingrid is no less entranced by ‘Mickey’ and his realm, where the totality of human remembrance is theirs to explore. But their dangerous relationship may have unforeseen consequences for both this world and the next when Ingrid is faced with the choice of becoming the privileged yet powerless queen of the dead, or attempting to thwart her supernatural lover’s unnatural ambitions.

*a genre-bending trip across time, myth, and memory*

Ingrid Redstone is a liberated witch facing a collision with life and death at the dawn of a strange new era. Her wanderings in the underworld bring her into contact with a cast of notables from the city’s past, including Dorothy Parker, Alfred Hitchcock, and Califia, the pre-Columbian Queen of California. From the ancient history of LA to the glittering future of the film industry, Ingrid goes where no one has gone before… and lived to tell about it.