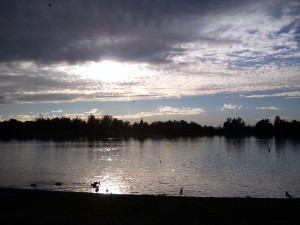 For generations, children throughout Mexico and the American southwest have whispered the same woman’s tragic story into one another’s ears, provoking nervous giggles while planting the seeds of nightmares.  She’s called la Llorona, the Weeping Woman or the Woman in White.  Almost every re-telling of her popular tale contains its own variations, but the basic elements are usually these: a poor but proud young mother, her disloyal lover, and their children, murdered by drowning in a flash of jealous rage but mourned for an eternity thereafter.

Maria’s beauty was the envy of her entire town.  So much so that she became certain her charms were destined to win her a husband of wealth and status, one who could raise her up out of the poverty to which she’d been born.  The man she set her sights on was the son of a local landowner, a handsome young bachelor whose attentions were sought after by girls from all the best families in the area— girls far more privileged than Maria.  She was right about the magnetic power of her beauty, however, and soon enough…